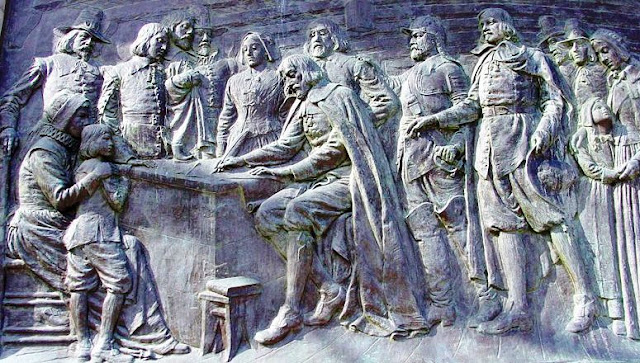 The Mayflower Compact was the first governing document of Plymouth Colony. It was written by the Separatists, also known as the "Saints", fleeing from religious persecution by King James of Great Britain. They traveled aboard the Mayflower in 1620 along with adventurers, tradesmen, and servants, most of whom were referred to as "Strangers".

The Mayflower Compact was signed aboard ship on November 11, 1620 by most adult men (but not by most crew and adult male servants). The Pilgrims used the Julian Calendar, also known as Old Style dates, which, at that time, was ten days behind the Gregorian Calendar. Signing the covenant were 41 of the ship's 101 passengers, while the Mayflower was anchored in what is now Provincetown Harbor within the hook at the northern tip of Cape Cod.

The Mayflower was the ship that in 1620 transported 102 English Pilgrims, including a core group of Separatists, to New England. Their story is one of travail and survival in a harsh New World environment.

The movement which led to the formation of the Pilgrim Church began in the Manor House at Scrooby, about 1605-6, under the ministrations of Richard Clyfton and John Robinson, and in the winter of 1607-8 an unsuccessful attempt was made by the members to reach Holland from Boston, in Lincolnshire. During the spring of 1608, they succeeded in making their escape and reached Amsterdam in safety. Among the names of those mentioned as being associated with William Bradford at this time or soon after were Elder William Brewster, William White, Isaac Allerton, Samuel Fuller, John Carver, Miles Standish, Stephen Tracy and a few others. Davis in his "Ancient Landmarks of Plymouth " says: "It is fair to presume that the Pilgrim community in Leyden was made up of members representing all the different classes of English life, outside of the circles of noble families, bound together by a common religious faith regardless of those differences in education and culture and social standing, which were insignificant indeed in comparison with their real bond of union. It was doubtless this disregard of social distinctions, forced on them by the necessities of their situation, which planted in their hearts that democratic seed, which at a later day germinated and grew in the soil of New England. It was the life of labor, too, led by them in Holland, which hardened their hands for the duties and hardships of a life in the wilderness, and which developed in their natures those capacities for practical, economical and thrifty work, without which their attempt at colonization would have been a failure."

Departure For America.
By the 11th of June everything was in readiness. Those of the Leyden company who were going to New England had sold their estates, putting their money into the common stock; the agents of the company in England had hired the Speedwell of sixty tons, and sent her to Delfthaven, to convey the colonists to Southampton, and the Mayflower of one hundred and eighty tons, had been engaged to meet them at that place, and join her consort for the voyage. "On the 31st of July" says Bradford "they left the goodly and pleasant citie which had been their resting place near 12 years; but they knew they were pilgrims  and looked not much on those things, but lift up their eyes to the heaven, their dearest countrie and quieted their spirits."

On or about the first of August 1620, they set sail in the Speedwell from Delfthaven, and on the 15th both the Mayflower and Speed well, with one hundred and twenty passengers on board some of whom were for the first time joining the company; sailed from Southampton. On the 23rd they put into Dartmouth, with the Speedwell leaking, and on the 31st sailed again. Further disaster to the Speedwell obliged a return to Plymouth, where the Speedwell was abandoned, and eighteen passengers, including Robert Cushman, gave up the voyage. On the 16th of September, a final departure from Plymouth took place and on the 21st of November, after a passage of sixty-six days, the Mayflower dropped anchor in Cape Cod harbor. "Like the down of the thistle they were wafted across the sea, and the seed they bore of popular government and religious freedom was planted on these western shores."

On the eleventh day of December (old style), the exploring party of Pilgrims who had left their ship, the Mayflower, in Cape Cod harbor, landed at Plymouth where they found "a place (as they supposed) fitt for the situation; at least it was ye best they could find and and ye season and their presente necessities made them glad to accept of it. So they returned to their shippe again with this news to ye rest of their people, which did much comforte their harts."
On the 26th of December the Mayflower dropped her anchor in the harbor of Plymouth.

Landing Of The Pilgrims.

When the Pilgrims landed at Plymouth they were not only outside of the limits of their patent, on a territory of a company from which they had received no grant, but they had settled themselves where the natives of the soil might dispute their right of occupation. They exercised tact, wisdom and good judgment in their dealings with the natives and thus secured their friendship. "By the gift from Massasoit," says Davis, "the Pilgrims, without charter from the King, or patent from the Northern Virginia Company, obtained a foothold and possession, which under a charter or patent alone would have been usurpation and robbery." A patent, however, was necessary to establish their rightful claim, and the Mayflower carried the news to England of the place of their landing, as well as an application to the Northern Virginia Company, for a suitable grant. After the Pilgrims sailed from England, the Northern or Plymouth Company secured a new charter from the King, dated the 5th of November 1620.
The first civil act of the Pilgrims after their arrival in Cape Cod Harbor, was to draw up a compact or " combination," as it is called by Bradford, which was signed by the male members of the company, and became the foundation on which the structure of our government has been built. Under date of Nov. 21st, Mourt's Relation states that

"this day, before we came to harbour, observing some not well affected to unity and concord, but gave some appearances of faction, it was thought good there should be an association and agreement, that we should combine together in one body, and to submit to such government and governor as we should, by common consent, agree to make and choose, and set our hands to this that follows, word for word."

THE MAYFLOWER COMPACT.
On the 11th day of November, 1620 (old style), there was drawn on the lid of a chest on board of the Mayflower, at Cape-Cod, and signed by forty-one of the principal men of the first band of Pilgrims, a platform of government known as the Compact, and which gave to these people the claim of being the first " Signers" of this important instrument. The following is the full text of the Compact:

Agreement Between the Settlers at New Plymouth 1620

IN THE NAME OF GOD, AMEN. We, whose names are underwritten, the Loyal Subjects of our dread Sovereign Lord King James, by the Grace of God, of Great Britain, France, and Ireland, King, Defender of the Faith, &c. Having undertaken for the Glory of God, and Advancement of the Christian Faith, and the Honour of our King and Country, a Voyage to plant the first Colony in the northern Parts of Virginia; Do by these Presents, solemnly and mutually, in the Presence of God and one another, covenant and combine ourselves together into a civil Body Politick, for our better Ordering and Preservation, and Furtherance of the Ends aforesaid: And by Virtue hereof do enact, constitute, and frame, such just and equal Laws, Ordinances, Acts, Constitutions, and Officers, from time to time, as shall be thought most meet and convenient for the general Good of the Colony; unto which we promise all due Submission and Obedience.

IN WITNESS whereof we have hereunto subscribed our names at Cape-Cod the eleventh of November, in the Reign of our Sovereign Lord King James, of England, France, and Ireland, the eighteenth, and of Scotland the fifty-fourth, Anno Domini; 1620.

On the same day John Carver was confirmed in the office of Governor. He had already been chosen Governor on board the Mayflower, and his confirmation was doubtless a mere form rendered necessary by the adoption of a constitution of government under which his official duties were to be performed. "In the cabin of the Mayflower, then" says Davis, " not only was the foundation stone of republican institutions on this continent laid, but the first New England town-meeting was held and the first elective officers chosen by the will of a majority." On the 27th of February the first recorded meeting on land was held in the common house " for appointing military orders," and Miles Standish was chosen captain.


Capitals of the United States and Colonies of America

Book a primary source exhibit and a professional speaker for your next event by contacting Historic.us today. Our Clients include many Fortune 500 companies, associations, non-profits, colleges, universities, national conventions, pr and advertising agencies. As the leading exhibitor of primary sources, many of our clients have benefited from our historic displays that are designed to entertain and educate your target audience. Contact us to learn how you can join our "roster" of satisfied clientele today!

Primary Source exhibits are available for display in your community. The costs range from $1,000 to $35,000 depending on length of time on loan and the rarity of artifacts chosen.


Students and Teachers of US History this is a video of Stanley and Christopher Klos presenting America's Four United Republics Curriculum at the University of Pennsylvania's Wharton School. The December 2015 video was an impromptu capture by a member of the audience of Penn students, professors and guests that numbered about 200. - Click Here for more information

No Taxation Without Representation

US Bill of Rights

*Republican Party - - is a defunct political party organized by Thomas Jefferson and James Madison in 1791. The Party went out of existence over the schism between John Quincy Adams and Andrew Jackson (both Republican candidates) over the Presidential election of 1824. Today, for the sake of expediency, political scientists incorrectly refer to it as the Democratic-Republican Party. Party members throughout its existence never utilized the name “Democratic-Republican.”

*** President of the Confederate States of America